Al-Quds Open University won the first places in the World Summit on the Information Society competition 2020, organized by the Ministry of Communications and Information Technology under the auspices of the International Telecommunication Union. OLC has developed the Arabic language application for non-native speakers with the aim of training Arabic language teachers to develop content to the first level of teaching Arabic to non-native speakers. The course includes six levels aimed at providing services to students, researchers, and those interested in Arabic issues. The application will be of interest to representatives of international institutions wishing to learn the Arabic language, and contribute to strengthening means of communication and exchange of cultures between the Palestinian society and the Western world. The Center has also worked on developing electronic content supported by audio, video, infographics, interactive exercises, virtual classes, social networks and technologies that help stakeholders achieve learning outcomes.

Recording educational sessions that aim to provide learning channels for students during emergency any obstacles that prevent students from participating in face-to-face lectures. Such sessions will engage and aid students achieve the required learning goals. These sessions are broadcast to students, and the links are published on the course pages and on the University’s YouTube channel as educational channels that students can access as needed. The sessions are also reused in various educational and learning contexts and they comprise the following courses: Cost Accounting, Research Operations, General Mathematics, Network Management and Security, Data Processing, Linguistics and others.

The Center conducted the following:

A physics course (Newton's laws) prepared by Staff members as part of the virtual reality project was also presented, as well as an overview of the open source (Open Simulator) technology. Drafts of educational scenarios were produced as part of the workshop's outputs, and will be used to construct virtual reality educational courses in the future.

The Center participated in the Moodle Teacher Certification Program, presented by the official partner of Moodle, Eummena association. The program was designed to enable trainers and teachers to possess the needed skills and competencies to handle with e-learning systems with confidence and ease. The training included participants from various Palestinian universities and institutions. Certificates of completion of the program were obtained with distinction.

In November 2017, QOU got the first place at the national level at the ALECSO Award for Mobile Applications in the field of culture. OLC participated in an application on the History of Jerusalem course. The award was organized by The Arab Organization for Education, Culture and Science. 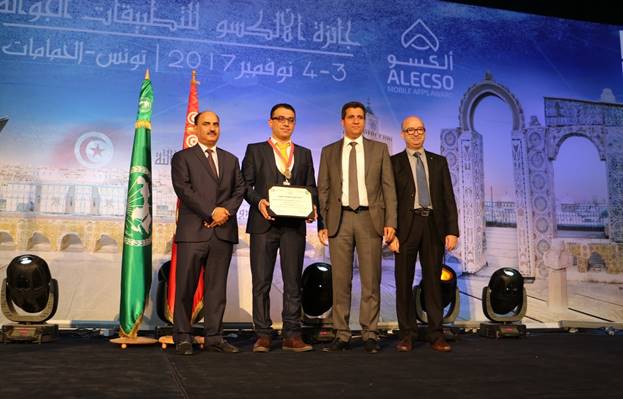 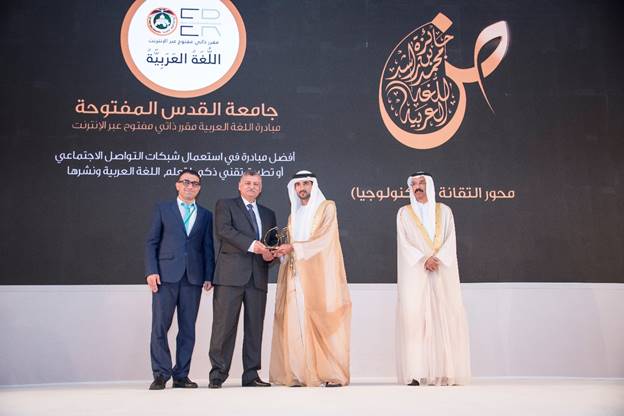 The Higher Council for Innovation and Excellence Award- Palestine 2017

The Smart Courses Project was chosen as one of the pilot projects at the second national forum of scientists in Palestine. The staff of OLC were honored during the forum, which was held under the supervision of the Higher Council for Innovation and Excellence in Ramallah. 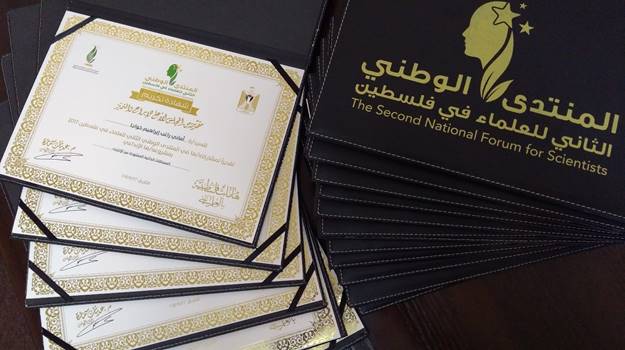 Educational Games -Rahoul in the world of computer

In early 2017, the OLC established the Development of Educational Games unit. A game called (Rahoul) was developed to teach basic skills in computer and most significant features and softwares. The game targets academics and students, as well as all the community. It was developed using gaming strategies, and in cooperation with the Faculty of Technology and Applied Sciences. 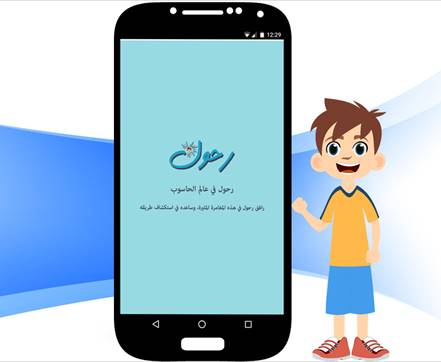 The crossword game was developed using educational games strategy. The game was added to smart courses as a self-assessment tool. 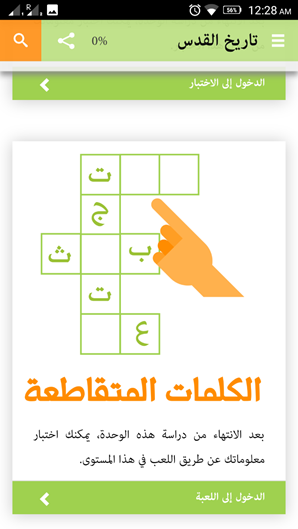 Within a research project led by Dr. Mahmoud Sabri, a Faculty Member at QOU, an interactive literature map had been developed. The map includes Palestinian writers from (1850 – 2000 AD) in terms of their lives, development, education, travels, and national political attitudes. The map is designed in a way that enables the administrator to place all other landmarks directly on the map. 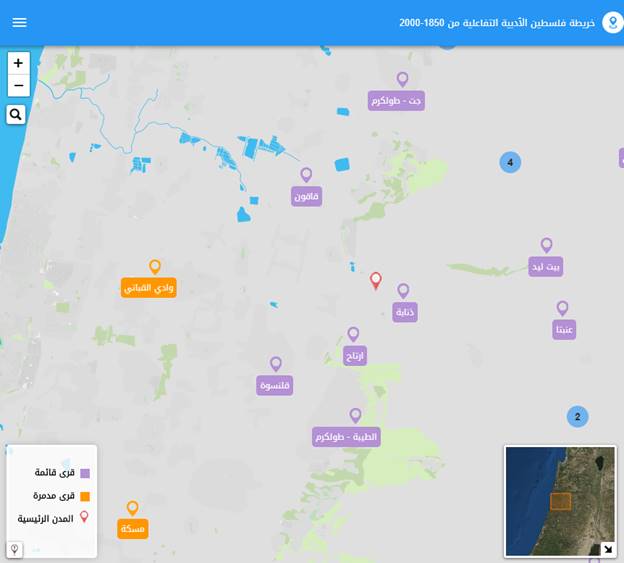 13 new courses, which consist of 100 educational sessions, had been recorded in collaboration with Al Quds Educational Channel:

This course was designed in cooperation with Measurement and Evaluation Center through a self-learning mode to enable participants design questions for the University's courses in accordance with the Question Bank system. Four training courses were held; some 50 Faculty Members joined the courses. The output of this training is that the Measurement and Evaluation Center obtained got of specific courses according to the Bank of Questions system. 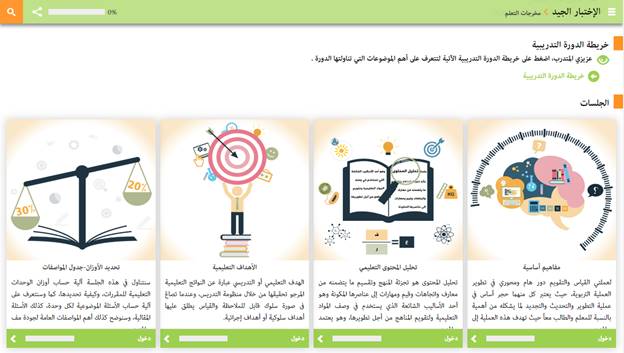 Launching “OSOL” Repository for Digital Content in its new form

“OSOL”, the Repository for Digital Content was launched in its new form in cooperation with the Faculty of Technology and Applied Sciences, the Deanship of Scientific Research and the Center for Information and Communication Technology. More than 1500 papers had been published in the repository in addition to hundreds of digital learning resources. 1. OLC and the Center for Continuing Education and Community Service, under the supervision of the Department of Academic Affairs, organized “Smart Learning Conference and its Role in Serving the Community”. The conference presented more than 46 scientific papers from 6 foreign countries and 4 Arab countries where the best 12 papers were presented during the conference sessions.

2. The conference was also presented concurrently online through developing the Digital Conference application (QOU Digital Summit) by OLC. This enabled a number of participants from outside Palestine to attend and participate in its sessions. The first scientific forum on digital transformation in lifelong learning

The forum was organized jointly by OLC and the Center for Open Education and Community Service, in cooperation with the European University Continuing Education Network (EUCEN), where many international speakers and researchers took part in the sessions. 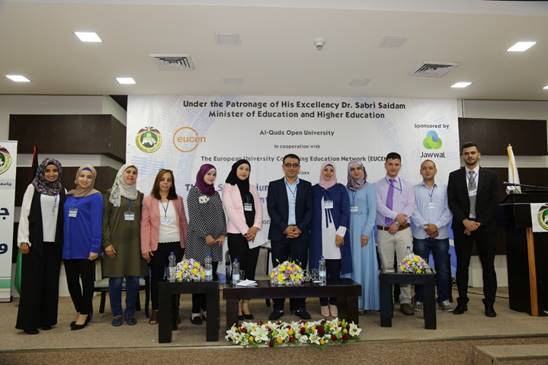 Educational tools were developed, in cooperation with the Faculty of Arts, as enrichment materials to support Listening Skills course and Phonetics and Pronunciation course.

The first electronic version of Qodorat Magazine, in collaboration between OLC and Continuing Education and Community Service Center, presents the most important activities and services provided by the two Centers through various articles. It also covers the first symposium of its kind, which was held in July on Digital Transformation in Continuing Education.

OLC staff developed the course of Strategic Management to be used on mobile devices which led the University to obtain Alecso Apps Award 2016 in the field of education. The contest was held by Arab League Educational, Cultural and Scientific Organization.

Developing the infrastructure of e-learning:

Development of the new digital content and restructuring the old one.

The OLC offered Programs designed to build capacities of students and faculty staff in the field of e-learning and blended learning were presented in the form of workshops and trainings as follows:

These programs are designed to enhance the competency of OLC staff in the field of e-Learning along with its latest tools and techniques though using self-study courses, other online learning resources, and training courses designed by experienced OLC staff. The capacity–building programs included different topics such as: